I have been thinking quite a bit about the “Arab Spring” recently. Back in 2007 our family spent three weeks traveling around Egypt (Cairo, Alexandria, the White Desert, Luxor and Hagarda) and we feel an affinity for the area because of our time there.

Strauss and Howe have pointed out that the Arab world (and Europe for that matter) lag behind the US in their generational cycle by about 5 years or so. But the changes going on in the Middle East seem a lot more like the Third Turning (Unraveling) of the 1960’s rather than a Fourth Turning (Crisis). But that may just be on the surface. The “agitators” in the Arab Spring sound a lot like our Millennial (born 1982-2004) rather than Boomer (born 1943-1960). The establishment they are forcing out or protesting against are Silent (born 1925-1942) in many cases – which is different than our leadership in the US (we have never had a Silent Generation president and probably never will). This article from CNN implies that the Arab youth are like the Freedom Riders of the 60’s.

I do wonder whether they are on an entirely different cycle than the US. The outcome of the Arab Spring will be telling in that regard. If it continues to escalate and results in a remaking of the institutions in the next 10-15 years, then they are part of the same Crisis cycle we are in. If it degenerates into social chaos and prolonged instability then they are headed where we were in 70’s and 80’s. I certainly hope for the former.

Although this recent article in the NY Times describes it as a collision between “Young and Old” I believe the Medicare debate is going to be about Boomer (born 1943-1960) vs. [X]. X’ers probably don’t expect to get much out of Social Security or Medicare (even though we will probably be the biggest contributors to the programs in our lifetime). Some of the proposals about cuts suggested a cutoff age of 55. If those measures were to pass in a couple years it would pretty much affect only Gen X’ers. No big surprise there, but interesting that the split would be so generational.

I am not sure if the Millennial (born 1982-2004) would really fight the battle against Boomers in the same way that X’ers would. I have a feeling that the Millennials might see it more of their duty to provide for their elders.

If this isn’t the perfect education for the Fourth Turning (Crisis), I don’t know what is:

This article in the NY Times is an apt description of the challenges we are facing because of our predominantly Boomer (born 1943-1960) leadership:

I think we are still early on in the Fourth Turning (Crisis) so this sort of bickering can still hold sway. The Boomers would still rather debate ideology than simply get things done. Contrast that with [X] leaders like Paul Ryan or Barack Obama who seem to be more focused on just coming up with a solution that will allow us to survive. I am not saying I agree with either Ryan or Obama or their proposals, but there is an interesting difference in the pragmatism you see from X’ers in leadership vs. the Boomers. The leaders mentioned in the story are Boomers (and one Silent (born 1925-1942)) who are willing to argue and debate endlessly.

BTW, if you are curious about the generational makeup of our current leadership, take a look at the American Leadership Database on the Lifecourse site. You can view all sorts of stuff under the analysis section, including the breakdown of generations of the current congress (click on it for a larger view): 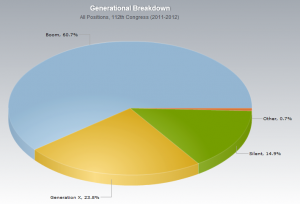 I just noticed that Wikipedia has a nice primer up on Strauss and  Howe’s Theories. It is a  good synopsis of the concepts. If you prefer a video version, you can always view my Youtube explanation:

The Millennial (born 1982-2004) has recieved the guidance and support of older generations (Boomer (born 1943-1960) in particular) throughout their youth. It started with the “Baby on Board” stickers in Volvos everywhere in the early 80’s. It continued with Soccer Moms and loads of after-school activities. They have been coached, guided and supported in ways that are really unique to their generation.

The Y Combinator group is a great example of the next step. They guide would-be entrepreneurs through a boot camp that ends in presentations to VC’s that are eager to invest. Compare this with the experience of most Boomer and [X] entrepreneurs who had to fight it out on their own. Other than paying  huge sum of cash to get an MBA there wasn’t really any way to get support for creating an online venture until recently. I realize that its just part of the generational cycle that means that Millennials will be given every chance to succeed in reaching their goals. I suppose I could be bitter about it but I can’t really picture myself (or many of my fellow X’ers) really wanting to go through the Y Combinator Boot Camp:

Eli Pariser recently spoke at TED about how social media, search sites and other online entities are creating “filter bubbles” that remove opposing views from users results. As a [X] I agree that this is worrisome, but I wonder if Millennial (born 1982-2004) will agree. The Millennial generation is much more willing to participate in group-think and less worried about individualism. Eli’s first quote is from a famous Millennial: Facebook CEO Mark Zuckerberg.

While it may concern Gen X’ers (and Boomer (born 1943-1960)) that people might tend to polarize around ideals, that fits right in with what the Millennials are all about: picking an ideal for the group and sticking with it. After all, isn’t that what they were taught by Barney for all those early years?