In Strauss and Howe’s book “The Fourth Turning” the describe the roles of each generation during the various “Turnings“.  At the end of the book there are “scripts” for each of the generation (actually the generation archetypes) in the Crisis (aka “Fourth Turning”) that represents the next 10-15 years in American history. Each script describes how the generation in question should act for a positive outcome from the Crisis. The script for the Millennial generation (Hero archetype) is shown below:

For the child Hero, the Fourth Turning looms as a great coming-of-age trial. Whether the Crisis will be won or lost will depend in large measure on the Hero’s teamwork, competence, and courage. By forever sealing his reputation for valor and glory, the Fourth Turning can energize the Hero for a lifetime of grand civic achievements.
Today’s Millennial children should bask in adult hope, remain upbeat themselves, and reject the Unraveling-era cynicism that surrounds them. They should keep their innocence and avoid growing up too quickly. They should do small good deeds while dreaming of the day they will do greater ones. By applying peer pressure to positive purposes, they will be able to reconstruct a positive reputation for American adolescence. When older generations preach traditional values that they themselves failed to learn as children (and which are not yet common to the adult world), Millennials would do well to ignore the hypocrisy—and heed the lessons. The sooner today’s children succeed in displaying these virtues, the more likely older people will be to treat them generously (by paying school taxes and relinquishing elder reward), thereby helping them prepare for their coming trial.
At the onset of the Great Depression, President Herbert Hoover demanded “a fair chance” for American youth: “If we could have but one generation of properly born, trained, educated, and healthy children:” he predicted, “a thousand other problems of government would vanish.” Events—and young G.I.s – proved him right. The Millennials’ time is near. If they play their script well, perhaps the day will come when they sing in unison, as young patriots did in 1776, “The rising world shall sing of us a thousand years to come / And tell our children’s children the wonders we have done.”

Will the Millennial Generation be up to this task? Only time will tell.

I have been meaning to write this post for some time, but perhaps I am a little embarrassed about the topic. My 8 year-old daughter is into the American Girl Doll Books and we often read them to her during the day or as bed-time books.  At first I rejected the whole American Girl Doll thing as terribly mainstream. Since our kids go to a Waldorf School, we are fairly counter-culture in how we go about parenting. Just look at the things: 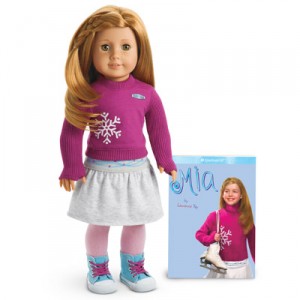 They reminded me too much of the whole “Just Like Me” dolls and the hyper-narcissism that they imply. Our daughter did manage to get two American Girl Dolls (as gifts) but I really started to balk when the books started showing up in the house (from the library).

But then I took the time to actually read one of them to my daughter and I realized they were fairly interesting. Each book is based on a specific girl from a period in history (I think there are several based on current times as well).  All the girls in the stories are between the ages of 10 and 12 (I think) and are based in different eras and generations:

When my wife and I were reading through the “Julie” stories we were struck by how well the reflected the times we grew up in. Of course it did not hurt that Julie lived in in the San Francisco Bay Area (where my wife grew up) and she was in exactly the same age group. But the portrayal of the times, with divorced parents and rebellious older siblings was a good picture of those times. Likewise the world of Kit, growing up in the Depression Era gave a very clear (and different) picture of what those times were about. The books have a somewhat moralistic tone (the kids are mostly do-gooders) but the times they live in are fair representations of history.

Reading the stories about the 1930’s were a particularly interesting lesson. One of the important concepts of generations is that we often repeat generational cycles because we don’t have a living history of those cycles. But books that give a 10-year-olds view of the Great Depression (a time similar to our current part of the cycle) are a great window into how to view that era and the people living in it. Hearing the compromises, fears and triumphs of kids living in the Depression (who would later go on to be the WWII heroes) is a unique perspective. Giving kids a perspective on what other children their age, in different times, have dealt with is a gentle introduction to how generational cycles work. My daughter did roll her eyes when she heard me say something about generations after reading one of the books. The kids hear enough about that stuff with Dad around…

It is also interesting to note that although the GIs, Silents and Generation X are represented in the series, there are no stories about the youth of the Boomers (born 1943-1960). Did Leave it to Beaver and Father Knows Best cover that period already or was their childhood just so boring that no one would be interested?

Is Millennial “Group Think” an example of how they are the Dumbest Generation?

Millennial blogger Rebecca Thorman at Modite recently put up an interesting post about Millennials and Community. There is one aspect I find particularly interesting:

Our friends “move in the same circles we do and are exposed to the same information. To get new information we have to activate our weak ties,” Albert-Laszlo Barabasi explains in his book Linked (via Valeria Maltoni).

This is a key aspect of how Millennials approach community. They may have strong ties to their classmates in both high school and college, and may join civic organizations to band together. But when it comes to online interactions there is a strong sentiment of “group-think” because the technology makes it so easy to filter out ideas to just the ones that match your bias.

This is a surprisingly powerful force, as Barabasi pointed out in his book (I read it a few years back). I think there are many Boomers (born 1943-1960) and Gen X’ers (born 1961-1981) feel that this dynamic will lead to the Millennials (born 1982-200?) will be the “Dumbest Generation“.  I don’t agree, but I do feel that the Millennial generation will be much more unified in their thinking. As an independent Gen X’er, I chafe at the idea of succumbing to group-think, but that does not mean that it is inherently dumb. Gen X’ers and Boomers are known for independent thought, and (particularly for Booomers) deep, introspective thought. This can be a wonderful characteristic, but can also lead to navel gazing. Millennials are more likely to piece together their ideas from multiple sources (the post on Modite contains 25 links!) that mostly agree with their ideas. Is it a more shallow approach than Gen X and Boomers take? Yes. Is it dumber? No.

The generation that the Millennials are most similar to (in recent history) it is the GI Generation (born 1901-1924). They, like the Millennials were subject to group think. Consider the society that they built in the 1950’s: a single American Dream that everyone was expected to buy into. There were few dissenters in the 1950’s when the GI’s were in power, but once their kids (Baby Boomers) came of age and the Silents (born 1925-1942) were there to lead them, there was a massive rebellion (the Consciousness Revolution of the 1960’s).

The way that Millennials work together, both online and offline, is a critical component in the society that they will help build (or rebuild, depending on how you look at it). The Millennials, as a generation, will NOT be deep thinkers. But I think it is valid to argue that we have had enough deep thought over the last 20-30 years. The challenges that face our society today will require resolute action, not more long-winded debate. And Millennials, like the GI’s before them, are nothing if not Do’ers. As an independent-minded Gen X’er I know that I will probably find much of the society that Millennials create in 20-30 years to be dangerously shallow, but by then I will just be another crotchety old man from a different age 🙂

Gen X’er Elizabeth Gilbert best known for her book, “Eat, Pray, Love” has a unique take on the nature of creativity. Her perspective, to me, is very Gen X in that it looks at the practical implications of creative fame and how to manage it. It inspired me to think differently about where creative genius really comes from.

USA Today had an article last week on how the Millennial Generation (born 1982-200?) is stepping up volunteering. There are a couple quotes by “Millennial Makeover” authors, Morley Winograd and Michael D. Hais (I am reading their book right now).

“Other generations were reared to be more individualistic,” Hais says. “This civic generation has a willingness to put aside some of their own personal advancement to improve society.”

If you are a Gen-X’er (born 1961-1981), take a look at this gallery that is included in the article. These kids are not acting much like we did in our youth. If you are like me, you probably can’t help think, “Damned goody two shoes! I’m not buying the act!”. Our Gen X cynicism sure dies hard.

I won’t be blogging here much next week because I am headed to Beijing, China for a week there with my ex-pat Brother, Robert. I will be posting photos and stories as time allows on my personal blog at:

More generational stuff when I return!

The conflict between Baby Boomer Alice Walker and her Generation X daughter, Rebecca, paints a clear picture of the strained relationships between these generations

This article about Alice Walker (early Boomer), written by her daughter Rebecca (Gen X’er) is a poignant example of the challenge faced by many Gen X’er with their Silent (born 1924-1942) and Boomer (born 1943-1960) parents. As Rebecca describes in the article, her mother was focused on adult issues (women’s rights) and ignored her daughter in the process. The story is told from Rebecca’s point of view, so we are not hearing all sides, but it is a picture that applies to an entire generation of kids born in the 60’s and 70’s: Parents focused on ideology of the adult world and kids fending for themselves.

“My mother is very ideologically based, and her ideology is much more important in many ways than her personal relationships,” says Rebecca.

“I keep telling people feminism is an experiment. And just like in science, you have to assess the outcome of the experiment and adjust according to your results, but my mother and her friends, they see it as truth; they don’t see it as an experiment.“

“People don’t really understand how strong ideology can be,” she says. “I think sometimes of that group and that feminism as being close to a cult. I feel I had to de-programme myself in order to have independent thought. It’s been an ongoing struggle. When you have a cult, you have a cult leader who demands a certain conformity . . . And when you have a celebrity who has cultural-icon status, economic power beyond what you can imagine, you can’t resist that person — if you want to stay in their realm. Because once you start challenging them, they kick you out.”