The generational makeup of our legislature is shifting, and it will definitely affect our future as we move further into the crisis.

Our leadership is constantly changing, not just in their political party, but also in the generation they represent. If you look at this chart from the Strauss and Howe website, Lifecourse.com, you can see the shift in the generations over the last 100 years: This covers only up until 2005 (you can also download a spreadsheet with their source data – very cool!) so I captured the information for 2007 and 2009 from the Congressional Biographical Directory and created a couple charts showing the recent trends.

The first is the number of congressmen (including both house and senate) from each generation in the last three congresses: 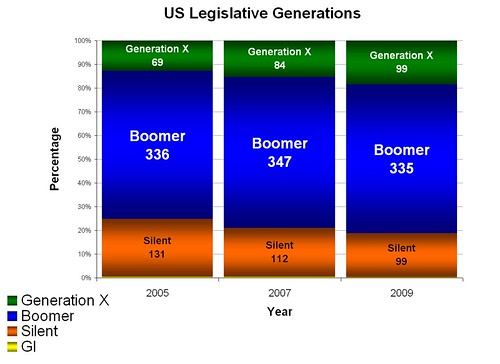 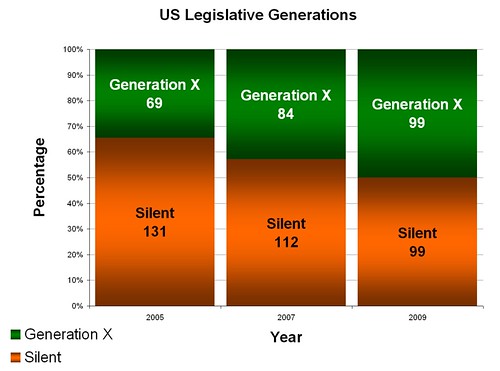 Generation X now equals the Silent Generation in Congress, up from around only 35% just four years ago. The shift from Boomer to Generation X will likely take many more years.
The significance of this shift is important. The Silent generational leaders are very knowledgeable, but are not known for decisive action. Generation X, on the other hand, is very practical and won’t get caught in “analysis paralysis”. Gen X leaders often go with their gut and are willing to try things out and evaluate as they go along. This will probably make for faster decisions in congress, but might also mean that those decisions are not as well thought out. You may also notice that there are not any Millennial generation (born 1982~2005) leaders in the Legislature yet, but I expect there will be several in the next congress.