I did not follow the Presidential race/inauguration/early days very closely, but I did hear a few things that made me think about the generational aspects of President Obama. Leading up to the inauguration there were many references to former presidents, particularly FDR and Abraham Lincoln. There are some similarities between Obama, FDR and Lincoln, but they have little to do with leadership style. The similarities are in the character of the time that they came into power.
According to Neil Howe and William Strauss in their book “The Fourth Turning

“, there are specific cycles in time which repeat on a regular basis. They work like this:

The similarity between Lincoln, FDR and Obama is that they all came into power during a crisis. But that is where the similarity ends, and another surprising relationship begins. Lincoln and FDR were both part of a generational archetype that was known as the “Prophet” generations, similar in character to the Baby Boomers. Lincoln was part of the Transcendental Generation and FDR was part of the Missionary Generation, both of which fit the Prophet archetype. Prophets are described as:

A Prophet generation grows up as increasingly indulged post-Crisis children, comes of age as the narcissistic young crusaders of an Awakening, cultivates principle as moralistic midlifers, and emerges as wise elders guiding the next Crisis. (from http://www.lifecourse.com)

Obama is not part of a Prophet Generation. Born in 1961, he is Generation X, which is a Nomad Generation:

A Nomad generation grows up as under protected children during an Awakening, comes of age as the alienated young adults of a post-Awakening world, mellows into pragmatic midlife leaders during a Crisis, and ages into tough post-Crisis elders

So when is the last time we had a pragmatic Nomad leading the country during a crisis? Take a look at this chart that shows the various generations and turnings visually (click on it to see a bigger version): 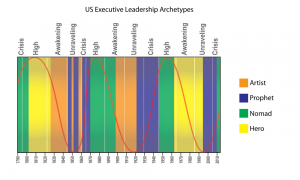 The colors represent the archetypes of each generation, Yellow for Hero (GI Generation, Millennials), Green for Nomads (Lost, Gen X), Blue for Prophet (Missionary, Boomer) and Orange for Artist (Progressive, Silent). On the far left is the founding of the nation with George Washington as president, and on the far right is the current day, extrapolating Obama out for four years. I have more detailed versions of this data that I will put up in a future post, but this diagram gives an overview of the presidential generations through our brief history.
There are lots of things you might pick up from this chart, but if you look for the crisis periods (1940’s and 1860’s, WWII and Civil Wars respectively), you will see the previous two have mainly blue bars, meaning they were Prophet Generations (Lincoln and FDR). The previous crisis was The American Revolution (way over on the left side of the chart) and it had a green (Nomad) leader: George Washington.
So who does Obama most resemble in terms of generational character combined with social cycle? He is Generation X, which is a Nomad generation (green in the chart), leading during a crisis. The last time we saw that combination was our first president, George Washington, a Nomad leader during the crisis (American Revolution). What does this mean for his potential in office? Having a practical leader who pushes getting things done during a national crisis is something our country has not seen in over 200 years. I may examine that in a future post.

You can download a high-res PDF of this chart